This is one of those desserts that will make you a SUPERSTAR to whomever you serve it to. This dessert it pure decadence on a plate.  It’s GORGEOUS, elegant, fancy schmancy, hoity toity and just unbelievably incredible.  Now it’s not terribly difficult to make but you will need a tad bit of patience.  Now I’m giving you an out and telling you it’s “okay” to use store/bakery bought croissants but if you know how to make your own, please do so as it makes a world of difference.  Sorry but I can’t give my TKW croissant recipe out as that’s proprietary.  Remember, my ultimate goal is to open a bistro so I will need a few recipes of my own to make some money, kapeesh. Seriously look at her and tell me she’s not one of the most beautiful things you’ve ever seen!

Now croissants are a labor of love when made from scratch. They are so worth it in the end but you really need patience when making them. Who knows one day when I have that bistro perhaps I’ll have Sunday classes where we make a full family style meal and maybe one of those classes will include how to make these. Would you be interested in something like that knowing in the end you could make one of these fully from scratch? So yeah I was in a croissant mood needless to say. There’s just something about those buttery flaky layers that you kind of just peel apart (at least I do) and eat it almost like cotton candy – a layer/piece at a time. Well okay I’m assuming that’s how you eat cotton candy as I don’t eat that crap. *blech!* Too sugary for me though Mr. Fantabulous could live on that stuff. It is a REQUIREMENT when we go to a game or amusement park that he gets some. No seriously, it’s ‘law’. LOL Okay I do have a slight confession that really inspired me to make the croissants.  See for some reason I want to make bread pudding as it’s a dish I never really was a fan of (though my husband is) and I want to come up with that recipe that would make me love it too.  It’s kind of this thing I do to help expand my taste buds and repertoire. However that’ll never EVER happen with cherries (damn seeds of Satan!).  LOL  So I got to thinking about what was it that I didn’t like about bread pudding and for me it came down to the bread.  It just seemed like more of a custardy-pudding (duh) French Toast.  Now it took me years to finally come up with a French Toast recipe that I like and it’s because of the bread that I use (challah or brioche). Now the more I thought about it for bread pudding the more it seemed like even those breads may be too heavy in this recipe.  The only logical thing left were croissants.  I figured I’d give them a try.  And since bread pudding works best with day-old bread, I originally planned on making the croissants… and letting them go stale just to make the bread pudding.  Yeah I know, pick your chin up and quick shaking your head.  I can read your thoughts “Who does that???  Who goes through all that work just to let it go stale???  TKW is losing it folks!”.  LOL  I know I know, welcome to my brain.  Scary, huh? Well that was my intention anyway until I pulled the tray out of the oven.  OMG the smells were intoxicating.  I literally couldn’t contain myself and picked a warm one off of the pan and immediately started to tear it apart.  Dear GOD it just melted in my mouth.  This was bad… so very bad.  LOL  2 croissants later (shush.. don’t judge me), I still had a crap-ton left (10 ginormous ones).  Since I wanted to make a small test batch of the bread pudding the next day I had to figure out what to do with the rest that were just sitting there… calling my name.  “Lori.. Lori.. Lori, you can run another mile, you want us, you NEED us…”  yeah it was rough BUT I walked away… for an hour.  HAHA

I packaged up 2 so I could have them another day.  As I stood there staring at them I got to thinking about Valentine’s day and dessert other than my Chocolate Covered Strawberries. I had 2 lbs of berries left and wanted to make a different dessert with them.  Now I’ve had chocolate croissants before (and LOOOOOOOOOOOOVE them) so I wanted to go that kind of route but more dessert-y.  Honestly, this dessert just kind of came together.  I had wanted to make some pastry cream to stuff into the dipped strawberries so I decided to make a bit more and use that in this dessert.  Since the croissants themselves were chocolate, I needed to add a chocolate element.  And yeah it was a no brainer – ganache was a MUST! Since the pastry cream takes a while to make and chill I made that first.  Now one thing I have to disclose about making ganache is that it’s one of those ‘tings that when I make it I need to either make it when Mr. Fantabulous isn’t home OR I have to make 2 bowls – one for the dessert and one for him.  You’ve read about my stories and him, how the time it ‘came alive’ and attacked him – forcing him to eat the ENTIRE BOWL.  Or the time he had to test it out to see if it was ‘poisonous’.  Or the time he denied til he was blue in the face that he had no clue what I was talking about even after I pointed out that there was ganache on his chin, his cheek, his fingers and his breathe.  We won’t discuss what he said it was.  So yeah, my man-child, needs his own bowl or I hide the single batch from him. LOL Once everything was all made, chilled and rested it was go-time.  Only I wasn’t sure still what I was doing with it.  Now for me, I committed a cardinal sin and took a serrated knife to those buttery, flaky croissants and sliced it in half.  I felt as if I had to apologize to the croissant community for doing so. It felt  wrong. So okay, it’s sliced and as I looked at those gorgeous flaky layers it reminded me of how a pâte à choux looks when you make profiteroles, croquembouches or éclairs. Now you could easily use that dough to make this but I was all about this croissant.

The ganache had cooled and thickened to where it was spreadable. Now after testing it to make sure it wasn’t “poisonous” (LOL) I slathered on a thin layer followed by a layer of pastry cream, sliced juicy thick strawberries and then another layer of cream and berries.  When I placed the top back on this dessert was just gorgeous but… it was “missing” something. It just looked nekkid.  AH HA!  I drizzled some chocolate sauce on top and OMG.  I so wish you were all in my kitchen to see my face light up.  I can’t tell you the last time I remember seeing a beautiful dessert.  Something so pretty basic if you think about it (bread, chocolate, cream, fruit); pretty straight forward but yet truly jaw-dropping gorgeous.  Now this dessert is HUGE and is meant to be shared (that is if you really want to).  So I let this chill in the fridge (covered) and served it later that night for us to split.  We fell in LOVE with this dessert but honestly even with 2 of us, we still had a bunch left over (first time ever I think). I would advise if you’re serving this for company to use the smaller sized croissants. 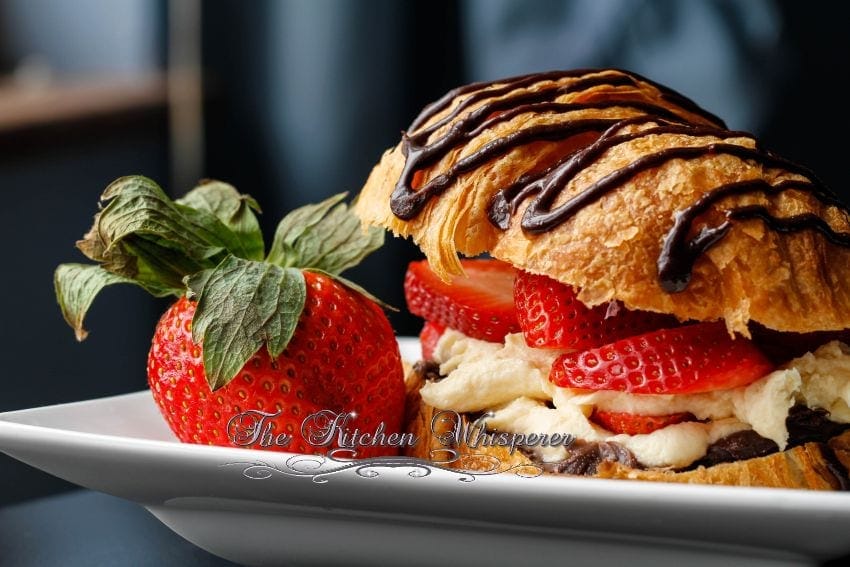 So if you really want to wow your Valentine or your guests or hey, treat yourself because you are THAT awesome, then definitely make this!  This WILL become your go-to dessert!