All of the amazing flavors as my infamous crock pot Guinness corned beef done in just 93 minutes all thanks to the wonders of the pressure cooker!  Hands down the BEST Corned Beef  with Cabbage, Potatoes and Carrots recipe ever!

My Guinness Crock Pot Corned Beef and Cabbage recipe is one of the most iconic corned beef recipes on the web. Since posting it 4 years ago it’s been liked/tweeted/pinned/shared millions upon millions of times. Simply put, it’s amazing and it’s easy.  No browning, no nothing – just dump it in and walk away.  The only part where you actually had to do work on that is if you wanted to make the Guinness Reduction sauce. For this pressure cooker recipe I didn’t make the sauce only because I was exhausted from working on the flooring with Mr. Fantabulous.  But what I did do was save the liquid and put it in the fridge. I’m actually going to make another corned beef and use that liquid (once I reduce it) as almost a Guinness bbq sauce and make pulled Guinness corned beef.

With St. Patrick’s day this Friday and so many of you having pressure cookers I had to share with you my pc version of this recipe. Honestly I don’t think I’ll ever make this  again in a crock pot. No way, this is so amazing!  And fast!  So here’s the dealio.  I had made my corned beef recipe in a pressure cooker a few times prior to this most recent recipe.  It was good buuuuuuuuuuut it wasn’t quite right.  Even though it used almost the same ingredients as the crock pot version it was missing something. Well the other day Mr. Fantabulous and his buddy were downstairs working on the flooring (it literally is never going to freaking end!) and I decided to put this in the crock pot for dinner.

…or so I thought.  Yeah I got side tracked with 37 other things and totally forgot to put it in.  So there is sat in the fridge… waiting. When I finally realized that I never started it I decided to put it in the pressure cooker and hope for the best.  I took my original recipe and studied the ingredients.  With pressure cooking you need at least a cup of liquid but nothing near what you would need for putting something in a crock pot. Next I reduced the brown sugar in it (slightly) and added the whole grain mustard to the cooking. Plus I left the veggies out (well not the onions) for main cooking. The first few times I made it I put them in the beginning and when the meat was done, the veggies were mush – eh, live and learn, right?

The other tidbit I did was I went with a natural release method on the pressure instead of a quick release.  That (and the whole grain) – those are the secrets behind this ridiculously tender meat!  The flavor was insane!  Now here’s the best part – know that head of cabbage, carrots and potatoes? Yeah.. into the pot they went (once I took the meat out to rest) and they were done in 3 minutes.  YES… 3 MINUTES to have tender soft carrots, potatoes and hello.. SOFT CABBAGE!!!  But OMG people the flavor!

Now his buddy didn’t get to eat this (and I’m secretly/not-so-secretly happy about this as it was more for us) because even though it only took 93 minutes to make, he had to leave early.  So when he left I threw this into the pot and went to help the man on some flooring. When we finished the timer went off. I scooted him off to the shower and started finishing the meal (i.e, add the veggies). He came out to the kitchen, looking so worn and beat that I knew this would put a smile on his face.  I grabbed an ice cold Guinness from the fridge for him (Mt. Dew for me) and started carving the meat in front of him. He, of course, asked what it was and when I said it was my corned beef he immediately asked for the horseradish…

Crap… I didn’t have any.  Horseradish is something I do not like.  It’s too…bitey for me; as in it burns and I don’t like the taste.  And he, yeah he only eats it once a year or whenever I make corned beef. If I take that same corned beef and turn it into a Reuben then he will only eat mustard on it (yeah it’s weird). So I broke the news that I didn’t have any and got the scowl. I heard the “you have a veritable grocery store in this house and you don’t have that?  Gee I don’t know, I’m going to have to dock your pay!” LOL  I just laughed and handed him the bottle of whole grain dijon.

I got ‘the look’ and said “just try it, trust me on it”.  Now as I was carving it I couldn’t stop snacking on it. OMG it literally just melted in my mouth.  I honestly thought about not sharing it with him even though I was standing maybe 2′ away from him and carving the meat right in front of him.  The thought did cross my mind on how I could hide this from him and perform some jedi mind trick to make him forget that he ever saw this and crave a pb&j instead but then that whole morality thing set in and I shared…begrudgingly. LOL

He took his first bite and let out an actual moan.  Like an honest to goodness moan of delight.  Oh yeah, Mama done nailed this thing.  He raved over and over AND OVER about this. He inhaled his and everything on his plate then eyed up mine.  THEN…

then he saw the huge plate of meat I had in front on him that I carved up… damn it, why didn’t I hide it?  LOL I know I’m terrible.

and that’s when he start to ‘pick’ small pieces and finally said “OMG get this away from me before I eat the whole thing!”  I said “You do and you’ll get beat. We must SHARE this!”  We’ve had this every day for the past 3 days and after our last snack we have just enough for one plate left.  I’m thinking we may have to flip a quarter (I’ll let him flip it while I’m busy shoving the last bites in my mouth!). LOL I’m terrible I know but folks I’m telling you what, this hands down the BEST CORNED BEEF I HAVE EVER HAD IN MY LIFE… I mean EVER!

Now if you don’t have a pressure cooker yet, I would recommend any one of these as they are awesome and I use them:

For stove top go with: For Electric go with either : or

Print
Print Recipe
Pin Recipe
★★★★★ 4.9 from 18 reviews
Did you make this recipe?
Leave a review 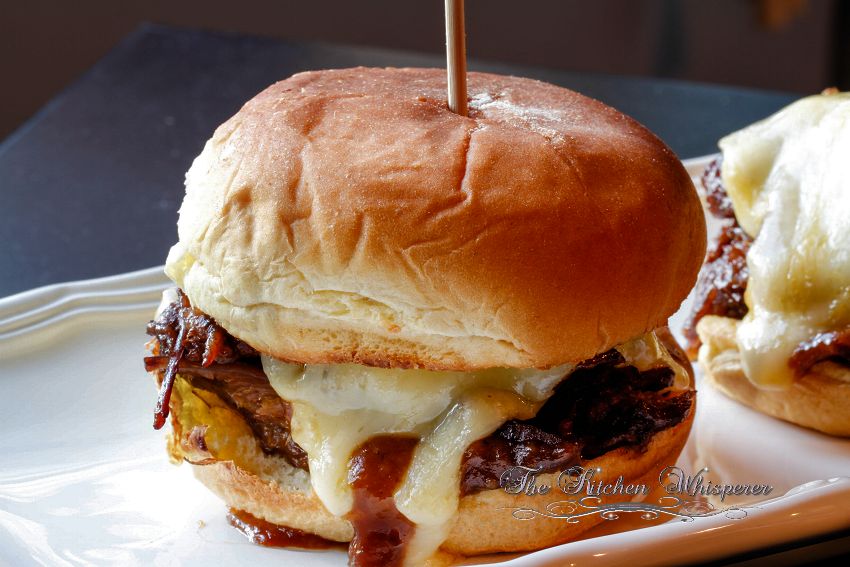