So apparently we’re supposed to get some nasty cold weather here in the ‘Burgh the next few days.  Apparently someone ticked off Mother Nature pretty bad here because having temps in the negative double digits windchill is unheard of around here.  I think the last time I remember -15 below was in 2001 when the Steelers played the Patriots in a playoff game here at Heinz Field.  It was so unbelievably butt cold that day that I wore 3 pairs of sweats, 5 shirts, 2 coats, 2 hats, 3 pairs of socks with feet warmers in my boots, 2 sets of gloves with hand warmers in them, 2 scarves and a blanket.  We were still so cold that I spent like $45 on a blanket at the stadium just to get some semblance of heat.  I think that was the turning point for me when I realized “yeah, cold weather in the ‘burgh sucks!” and my love for Arizona weather evolved.

Therefore with this impending arctic weather that is approaching I’m all about comfort food.  Sadly I’ll still have to venture outside for work but at least I’ll know I’ll have something warm in my tummy to sustain me and help keep the chill off.

I first made this dish after Christmas using up some of my Christmas ham.  It’s a ‘re-purpose’ recipe that Mr. Fantabulous fell in love with!  Even though the Christmas ham is long gone I went out and bought some ham steaks just to make this dish again.  It’s hearty, delicious and just comforting. This dish is just pure bliss on a plate!

Now this dish isn’t exactly on the ‘healthy’ side BUT you can certainly ‘healthify’ it rather simply with just a few changes (I’ll show you in the recipe).  It’s simple food really; stuff you’d probably never find in a fancy schmancy restaurant but would definitely be something you’d find on the menu at my bistro (*crosses fingers and says a prayer* … someday).

When I was making this dish I was chatting with my one girlfriend online and was telling her what I was making.  Her response was “Oh, you’re making mac ‘n cheese with ham.” Well let’s just say that led into a very lengthy debate over what constitutes “true mac ‘n cheese”.  When I posed this to our Facebook wall, I believe every person said that true Mac ‘n Cheese was elbow noodles and cheese sauce.  Any ‘add’ ins kind of ‘negate’ the trueness of it but in the end its left up to the recipe creator.  Now I make lobster mac ‘n cheese, seafood mac ‘n cheese and about 10 other varieties of it and none of them are with elbow noodles.  For me because this dish isn’t as cheesy where the cheese almost encased the noodle in cheesy love. What this dish is though is creamy, mildly cheese, crispy topped, ham and peas infused pasta dish that seriously you will fall in love with.  You can change up the cheeses if you want, go with what you have on hand.  Since I always have a variety of cheeses on hand I decided to keep the types used in this recipe pretty basic (and affordable). Now for me my favorite combination is Asiago, Gruyère, Parmesan and Fontina.  Well considering 2 of those cheeses aren’t exactly in a lot of people’s’ budgets I made it with Mozzarella in lieu of the Gruyère and Fontina.  I’ll be honest, this other cheese combination ROCKED as well.  It’s what gave it that pull-away-cheesy-string effects you see in the pics (which I LOVE LOVE LOVE). Speaking of pull-away-cheesy-strings aren’t these pictures awesome?! I’m seriously LOVING my new macro lens Mr. Fantabulous got me for Christmas. I’m getting the hang of it and how to adjust the settings manually.  This dish stores really well in the fridge.  I haven’t tried to make it and then freeze a tray of it – only because it goes too fast in my house. This is the time of year where there isn’t much to do outside (if you’re living say in Pittsburgh) – well okay you can ski or ice skate but yeah, that’s not a me thing.  I’m more of a ‘Hey let’s get together at X’s house Sat. night, play board games, do karaoke and bring a covered dish’ type of girl.  This is a fantastic dish to take to one of those get-togethers. It travels well and reheats beautifully!  Just pop it in their oven for 15-20 minutes, heat it up and then set it on the counter with the rest of the foods while you’re playing cards or board games.

*HINT HINT* to my Pittsburgh friends…. I’m up for game night *wink*. LOL By now I’m pretty sure you’re mind has wandered to “do I have all of the ingredients on hand to make this today?” or better yet “can I get away with going to the grocery store in my pajamas without being seen???”  Yeah… this is one of those recipes that will make you consider it.  I’ve done it… and got busted by someone I knew.  LOL But hey, in the name of food, it’s worth it.

And um while you’re add it, if you wouldn’t mind making a plate for Mother Nature here so she can cheer up and give us some warm weather here in the ‘Burgh I’d be much obliged!  LOL Print Recipe
Pin Recipe
★★★★★ 4.7 from 3 reviews
Did you make this recipe?
Leave a review 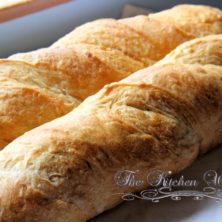