Now I do my very best to give you recipes that don’t require special equipment however this is one of those that you really, really need a donut pan.  HOWEVER… you can make these in your cupcake/muffin pan but, obviously, they won’t be donuts.  LOL This whole donut thing I blame on Mr. Fantabulous.  See he went out with the boys one night to jam and left me home alone (like he took my car but did leave me his).  The only problem is his is a stick shift and this girl has ZERO coordination therefore driving it is not an option.  Now granted he did try to teach me and he had the patience of a nun but I was a nervous wreck.  So nervous that I actually had to pull over and well “be sick” because I was that worked up. I just don’t do stick shifts.  Just like I don’t do parallel parking.  I managed to pass that part of my driver’s license test with I swear God’s help because as soon as I became legal to drive, those skills disappeared. So as I was saying, these donuts are HIS fault!  Since I was stuck at home I actually sat and watched some TV; something I never, EVER do.  Well I was flipping stations and found some food show.  Well it was all about donuts.  I’m not a real big fan of them.  I mean, just like pancakes and the like I love the first bite or two but anything after that and I’m done.  It’s like a brick in my stomach.

Well this show was so awesome that I actually was craving one.  However by this time it was like 2am and my baby had just got home.  There was no way I was baking at that time.  So I got up around 6:30ish (yeah, did I mention I don’t really sleep a lot?) and just HAD to make donuts. 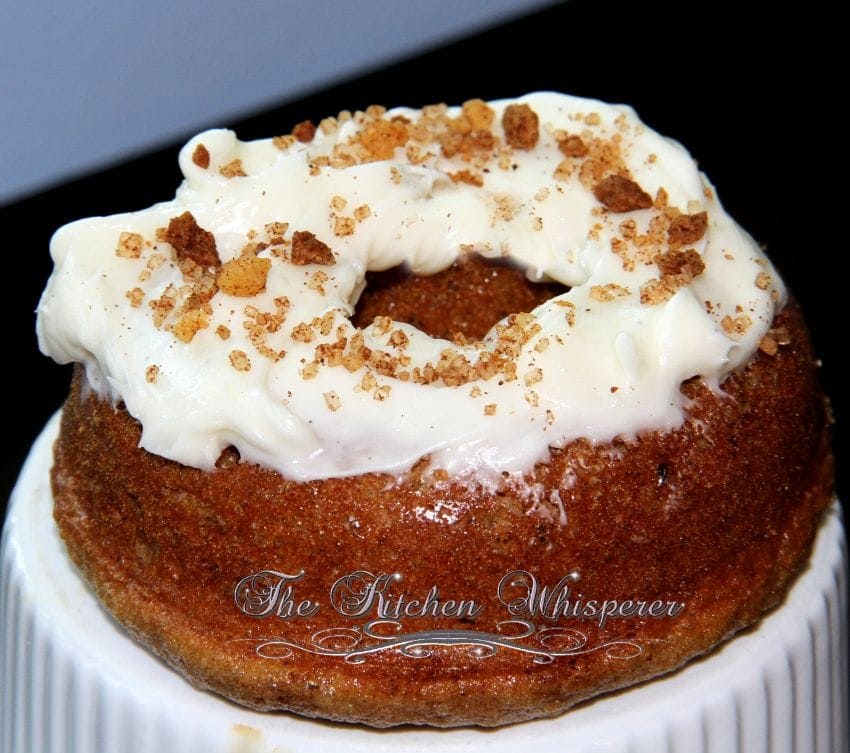 Since I know my honey loves cinnamon rolls… and I didn’t feel like making them, I decided to give a shot at making cinnamon roll donuts.

Have to admit, these turned out really good.  The flavors were packed with cinnamon, brown sugar and that luscious cream cheese but with the texture of a baked donut.

And that frosting… Oh Dear Sweet Baby Jesus on a donut!  I fell in such love that it almost became unholy!  LOL I really think next weekend you need to make these for well… yourself!  Forget the rest *wink*