Get out of that same ol’ recipe rut and try one of these delicious and easy recipes this week! This week I highly recommend making the Creamed Chipped Ham (Beef) on Toast – SOS and the Potato Gnocchi in a Bacon Cream Sauce!

Happy Sunday TKW Family! So holy crap, has it been raining here in the ‘Burgh! So many of my friends, where I used to live, got flooded out. Thankfully, we were okay though I don’t think we’ll be able to cut our grass for a month as it’ll need to take that long to dry out. At one point I told Mr. Fantabulous we should start building an Ark and gathering 2 of the same thing to take aboard. That then led us into a very in-depth discussion of the ‘things’ we would take. Since we do not have kids or pets, we had to resort to ‘things’ we have. The discussion started off “Well I’ll take all of my hand tools and my power tools.” To which I responded with “I’ll take all of my kitchen equipment and my cooking pots/pans.”…. and that’s when we went down a rabbit hole.

He said just one pot or one pan so I responded with “well then you can only have one screw driver or one hammer”. Then the engineers in us both came out because then we tried to justify that each ‘item’ had a specific purpose or use meaning that I wasn’t allowed to make his tools generic as a flat head screw driver was different from a philips. *side question – why is it called ‘philips’? Was there some guy whose name was that and that’s why it’s called that? And that hammers were all different so technically he wasn’t bringing two of the same. I then said “well a saucier pan is different from a skillet. And then we have to go with stainless to non-stick therefore technically those are technically different too!”

See where we went there. We ‘justified’ our ‘stuff’ and why we were bringing it all.

In the end we decided that we each need an ark that we’ll tether to one another. He can fix my ark and I can feed him. LOL Problem solved.

So last week I finally had that feeling of progress with the house. The last bit of carpeting was installed and now all of the bedrooms are ‘set up’. The formal living room and dining room are done  – including all of the paintings and little personal items. I still need to add more but it’s almost done dare I say. This week, if the grounds are not a swamp, we need to tackle the landscaping. Thankfully one of Mr. Fantabulous’ friends is going to come over and help him/us for a few days. I feel good paying him as I know he needs the money and I trust him to help us out. While they are doing that, I’ll work on gathering more stuff to donate (lord you all should see the pile of stuff in my kitchen that we are donating. I MUST tackle clothes this week. Also we need to work on the pool house and just clean that up.

We also interviewed a realtor Friday night. It got real for me at that point. We’re hoping to list by mid July at the latest. She said something though which surprised me. Maybe you guys can help us out.

She said “I noticed you don’t have any personal pictures up. Why is that?” Now we were always told that when you’re going to sell a house that you really shouldn’t show any personal pictures as that makes it hard for the prospective buyers to envision the house for them and them living in it. That the pictures makes them think “this is their house”. To my realtors out there, what do you say? Now we do have photos but our walls were never blasted with a million pictures but rather maybe 10-15 throughout the house or perhaps one in every room or so. I’d love your input on this!

Let’s talk brownies – are you a crispy edge kind of person or do you prefer the center cuts? In my house Mr. Fantabulous is all about the center cut – no crispy edges for him. Where I’m like “Dude, it’s a friggen brownie, you eat them.”

For those crispy edge only lovers, I found this pan on Amazon. Now for those of you that have “I only want the center cuts with no crispy edges I have a tip for you – cut the edges off! Save those edges for an ice cream topping or even mixed into a truffle! Oh heck, eat ’em! BONUS food for you! 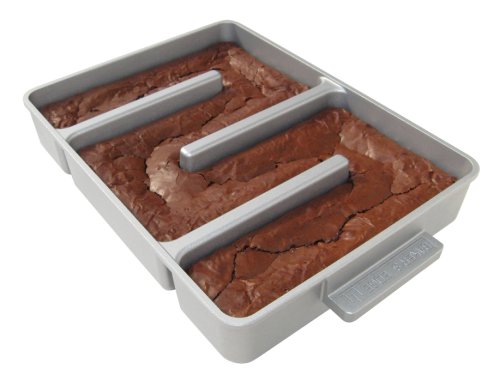 Last week on Instagram I started a new thing by not only posting my photos but also sharing some photos that make me stop scrolling and stare! Definitely check it out! This bread, came to be because I left my pizza dough slow rise for 72 hours in the fridge. What eveolved was almost a sourdough-ish flavor! I then patted it out into a rectangle brushed with olive oil (and a drizzle of butter) then added copious amounts of cheeses and herbs, rolled it like a cinnamon roll and then let proof (as-is). Before I baked it, I cut it almost hasselback-style though the cuts were 3/4″ apart, brushed with beaten cheesy herb egg wash and baked. What came out was PURE MAGIC! I need to make another just so I can take pictures and post a proper recipe!

That cheese pull tho… These Cheesy Herb Olive Oil Rolls are better than I anticipated. The dough is so incredibly tender and soft while the cheesy herb egg wash gave me a crusty exterior. The cheesy herb filling infused all throughout the bread to produce one of the best breads I’ve ever had. ⠀⠀⠀⠀⠀⠀⠀⠀⠀ I’ll share the recipe soon but considering I made this up on the fly let me make sure it’s not a one-time success. You all know me and know I’m all about repeatable quality. So if that means I have to make 25 more of these well, I’ll take one for the team! Lol ⠀⠀⠀⠀⠀⠀⠀⠀⠀ ⠀⠀⠀⠀⠀⠀⠀⠀⠀ #thebakefeed #f52grams #realsimple #imsomartha #comfortfood #doughlife #rolls #bread #foodblogger #wheat #cheesus #testkitchen #thekitchenwhisperer #chefsofinstagram #bareaders #hautecuisines #gloobyfood #eatingfortheinsta #wheat #gluten #pizza #cheese #foodvideo #eeeeeats #fwx #chefsroll #pittsburgh #foodporn #goodeats #foodgasm

THIS SANDWICH! I’m pretty much sold that I want this to be one of my last meals! It’s true summer on a bun!

When you have only a few Tater tots in the freezer, grab some pulled pork, slaw and make one of my FAVORITE sandwiches!!! This burger has gluttony written all over it in the best, most delicious way possible! ⠀⠀⠀⠀⠀⠀⠀⠀⠀ Go on and indulge! ⠀⠀⠀⠀⠀⠀⠀⠀⠀ #thekitchenwhisperer #gloobyfood #sandwich #eatingfortheinsta #eeeeeats #seriouseats #tastingtable #foodstagram #pittsburgh #huffposttaste #buzzfeedfood #food #foodie #foodies #foodbeast #food52 #foodiegram #sandwichlove #sandwiches #sandwichporn #sandwichbar #sandwicherie #sandwichartist #sandwichoftheday #mecookmeeat #peepmyeats #eater #eatfamous #munchies #devourpower