There are days when I miss certain family members more than normal.  See I was really, really close to my grandmother growing up. She was the only grandmother I knew and I can remember spending every single Saturday with her for the longest time.  She’d pick me up and take me to her local drug store.  She’d play her ‘numbers’ and then we’d go to the back of the drug store where they served food.  Wasn’t the greatest but it was time with Grandma.  It was “our” special time. Now see my Grandma was cool, I mean seriously rockin’ cool.  Sure she was older but my Grammy drove a souped-up Chevy Nova that had white leather interior, metallic flake cherry red paint and an engine that was as loud as could be.  I don’t think she had an exhaust system on it.  LOL  She had cat-eye glasses and every week her hair was a different color – purple or pink.  No, really – we’re talking purple or pink. She was amazing.  I can remember sitting in her tiny kitchen and her teaching me how to bake things and explain how things were done in ‘her days’.  Now mind you, this is the same Grandma that one year decided to save money she would use paper plates for a holiday dinner.  No big deal right?  Yeah um… I guess I should mention that she always wrapped them in plastic wrap so we could re-use them.  LOL  Hey times were tough but that was a new one for me. Anyway, after our breakfast we’d go to the local grocery store to which whether we had to stop and get just milk or full-blown shopping we had to walk up and down every single aisle.. just in case something popped out that we may need.  Thanks to her, I still do that to this day.  Habits are hard to break plus maybe part of me takes that time to think about her; still considering it “our time”. After shopping we’d go back to her place and either we’d play Barbies, look through my umpteen sticker books, color or just talk.  Around 10:30am we’d have tea and then at 11:30 we’d have lunch.  Lunch was always her special fried bologna sandwiches.  God I loved those. Well a few weeks ago I was at home going through the store ads, making my grocery list and I saw that bologna was on sale.  Now to be honest I bet you it has been 17 years since Gram had passed and since I had bologna.  I just didn’t eat stuff like that anymore.  So later that night I kept thinking about her and our times together; really missing her more than normal.  Then out of no where I got the most incredible craving for one of her Pittsburgh Fried Bologna Sandwiches.  No, you don’t understand how intense it was.  I literally contemplated going to the store and buying the stuff for it.  Alas I decided against it as well, I didn’t feel like putting on real pants (or a bra for that matter.. I know, TMI but hey if you’re a woman these are things we have to think about). Now mind you where I live shopping in your pajamas is kinda not surprising as I’ve seen it one too many times to be shocked by it.

So that weekend as I was doing my shopping I bought 4 slices of bologna (yeah you should have seen the look the deli girl gave me), grape jelly and white sandwich bread (only because I didn’t have any made up and I didn’t feel like waiting). I rushed home, put the groceries away and got ready.  Now it’s funny because as I was making this I would catch myself beaming from ear to ear.  It’s as if she was there with me.  I can remember when she was making them for me she’d have the bag of chips open on the table and I’d do my very best to sneak a few extra while she had her back turned.  However no matter how slow I’d go I’d still manage to crinkle the bag and she’d turn and give me the stern look but then follow with a big old grin and wink.  LOL 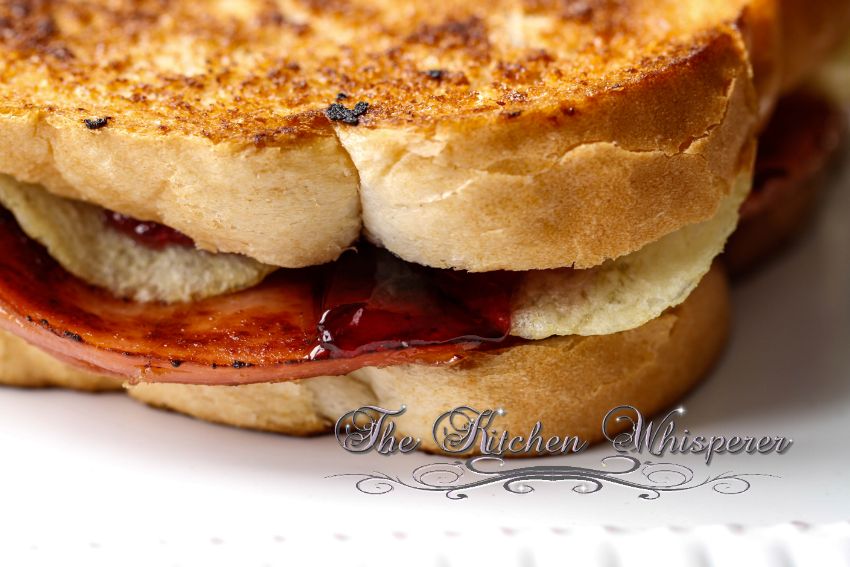 As I was plating this and cutting through it I sat there for a minute and just felt, I don’t know, sad because she wasn’t there with me, eating her sandwich as well but I felt comforted if you will. Something so simple, so peasant just brought out such emotion for me.  It touched me, this stupid little sandwich truly touched my heart.  So yes as I ate this, it made me feel comforted – like she was there with me.  And yes as I reached to grab a chip from the bag, I hit my arm against the side making that crinkle noise and I chuckled a bit.  As if I was waiting for her to turn around, give me that stern look then a big old grin and wink.

To me, this was pure and simple food.  It was what we could afford but more importantly it was something that truly made those Saturdays with my Grandma just so much more personal. Print Recipe
Pin Recipe
★★★★★ 5 from 6 reviews
Did you make this recipe?
Leave a review