These are days when you’re in the grocery store and literally you have zero idea on what to make for dinner.  Like nothing looks good nor does anything sound appealing. I can make 9 billion different things (or okay maybe a few less than 9 billion but you get the gist) but I just lost on what to make. Like I ran out of ideas.  Now if it were Mr. Fantabulous he would have been perfectly fine with pasta but you know me by now, I need a variety; I need something different.  Sure I go in phases where I could eat the same thing day in and day out (pizza and bacon) but even on that day neither of those sounded good.

Well clueless me didn’t realize that it was ‘feeding’ time at the store which meant there were 175,000 people all trying to get a morsel of a free sample.  I’m sorry while I too appreciate a snack if you will while shopping as it does create an upsell for the store but I swear to God people in general lose their manners when a free 1/8″ piece of free food sample is offered.  I don’t get it and if there is such a thing as shopping cart rage then I have it.  I’ve actually had to say loudly (after saying ‘Pardon me I’m trying to get through’ 47 times’) “EXCUSE ME!  Would you move your butt out of the way so I can actually shop and not stand in line like a herd of cattle waiting for their slop?  Move it lady or go home and eat some damn carrots!” and there may or may not be a minor curse word (or 14) throw in there (provided there are no elderly or children around).

Anyway, as I rammed these people with my cart (okay it was just in my head where I did this … admit it, you’ve wanted to do it as well), I managed to get to the fresh cut meats section.  There I saw the butcher just put in some of the prettiest pork tenderloins I’ve ever seen.  Just truly beautiful.  So I bought a 4lb loin and finished my shopping.  As I unpacked and put away the groceries I would glance over at the meat on my counter – kind of clueless as to why I bought it as I had zero idea on what to do with it.  I didn’t want it as any of the usual ways I would make it; I wanted something different. Since the meat was still pretty cold I let it sit on the counter for a few while I made myself a cup of tea with honey.  I had been fighting a sore throat for a while and love tea with honey and cream.  That just soothes it.  As I was sitting there I had noticed that I set the honey bottle next to the pork.  Next to that was a block of Parmesan cheese that I needed to grate for Mr. Fantabulous’ pasta. That kinda got me thinking maybe making a sauce out of those items.  I love pork with honey drizzled over top.  And I’ve had pork with cheese on it but I hadn’t tried mixing the two together.  I figured just those 2 alone would make the sauce flat.  It needed some heat to balance it out. I whisk together the 3 items but they were way too thick so then went to the pantry and fridge to add to the mix. Basil was next on the list as was garlic and a few other items however the sauce was still way too thick.  Since I was throwing caution to the wind here I grabbed some soy sauce plus olive oil and starting pouring while I whisked. Final taste test and Mmmm!  Pretty tasty if I say so myself!

Now… how to make it? After looking at the clock and realizing he would be hungry again in about 2 hours I didn’t have much time therefore no crock pot here.  Thus I grabbed the dutch oven (with lid), added the pork, poured over the sauce and let it slow bake. Once the pork was done I took it from the sauce and tented it with foil. Do you know why you tent meat like this with foil and let it rest for a few instead of slicing it immediately? By tenting it you help keep it warm but the foil also helps it retain it’s moisture. If you cut any meat immediately from the oven or grill you will lose all of your juices and essentially that gorgeous cut of meat you just made will be nothing more than dried shoe leather. Blech! While the meat rested I got to making the sauce. I skimmed the fat from the pan and poured the yummy yumkins remains into a pot, brought that to a boil and then made a quick slurry of corn starch and water to help thicken it. By the time it was thickened I went to slice the meat. OMG it was beyond tender. It cut absolutely perfect! And yes, I sleep perfectly fine at night. Besides, pork and bacon only come from ugly piggies *blink blink blink of her baby blues* haha

So if you’re looking for a totally different type of pork, give this on a try.  It’s super juicy and tender and the sauce compliments it quite well! 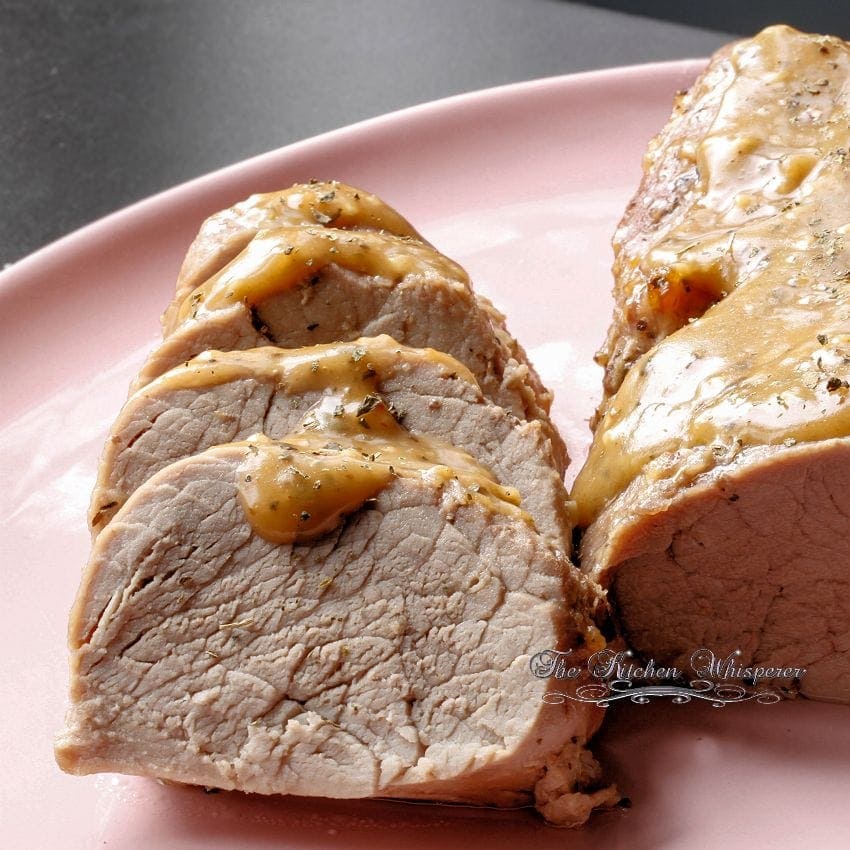