Have you ever had a wedgie?  No, I’m not talking about those ones where someone grabs the back of your gutchies (yes I call them gutchies) and pulls them up so high to the point them are pretty much embedded into your butt cheeks permanently.  You’re up on your tippy toes and at the mercy of that person.  Normally when you got one you were either A: the younger sibling or B: being bullied (um don’t be a bully as that’s so not cool and it’s wrong plus you really don’t want the TKW Family ticked off at you.. kapeesh?).  Now as kids us siblings did it as a joke to one another except it was never funny when it was being done to you.  Plus you ruin a perfectly good pair of gutchies.  Yes I’m sticking with gutchies; go with it.  It’s a fun word and it makes me smile.  Plus that’s what my Mom called them and anything that reminds me of my Mom is awesome. 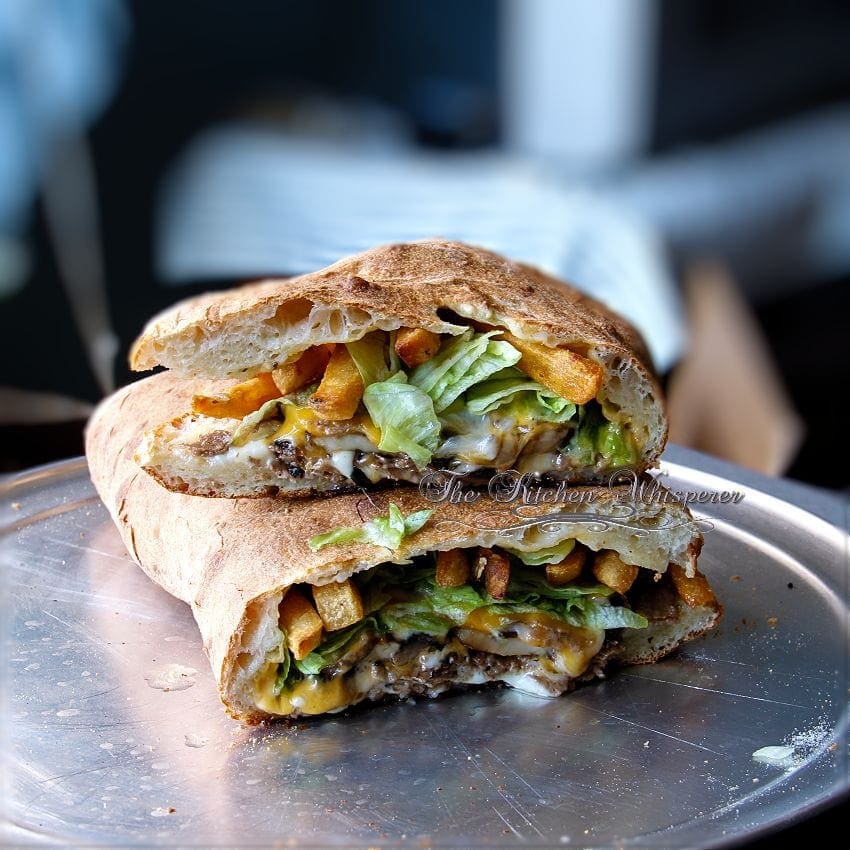 No this type of wedgie I’m talking about comes from my days running my family’s pizza shop.  See we had 3 different things that we made with pizza dough in addition to our regular pizzas.  We made calzones, strombolis and wedgies. I’ve already discussed what a calzone is and in a future post I’ll go into a stromboli but today we’re talking wedgies.  Now to my knowledge wedgies were first created in Pittsburgh in the early 80’s.  Essentially a wedgie is a half-moon shaped pizza dough that is filled with all the ingredients that would go into/on top of a hoagie and then baked.  When it was done it was then split open and the condiments were then added.  The dough was your ‘bread’ for this pizza sandwich.

Like this.. see how the dough wraps around your fillings just like bread does only this is a bajillion times more awesomer.  Yes, awesomer – go with it. To make these they are pretty straight forward.  Have whatever toppings you would normally use to make a hoagie/sandwich ready to go, pizza dough ready and your oven turned on. So if you wanted to make the Italian Rocket into a Wedgie all you need is pizza dough instead of a hoagie bun and you’re all set! Now I’m sure some of you will be like “OMG!  It’s alive!  It looks like an open mouth!” LOL Well this is also part of the wedgie that separates it from its counterparts – the calzone and stromboli.  See when the wedgie is done and you remove it from the oven and split it open along the seam.  First off I LOVE this look as you get to see all the cheeses being ooey gooey and the smell of the hot dough with the meats hit you with such a punch it knocks you into Flavorville!

THIS my friends is a proper wedgie!  And it was mine.. ALL MINE!

…well that is until Mr. Fantabulous and his impeccable timing wandered out into the kitchen. “Heyyyyyyyyy what’s that???  Wait!  Is that a wedgie like you used to make at your family’s pizza shop???  OMG I haven’t one of those in years!  Are you gonna share?” (as he grabs himself a plate, fork and knife).  Mind you, I didn’t have a plate, fork or knife yet he did.  He stood there like Oliver Twist, plate in hand looking up at me (okay technically looking down at me as he’s about 5″ taller than I am) batting those gorgeous eyes of him as if to say “Please sir may I have some more???”

LOL dear Lord I can’t say no to that man however I did tell him to hold his gutchies (yes the real ones) as I wasn’t done with the dish.  I still needed to fill it with the condiments and fries. Why fries?  Why not?  See here in Pittsburgh fries are not only a side dish but they are also considered a condiment.  They are put on wedgies, salads, sandwiches, pizzas – just about anything plus you always get a side of fresh to dip your Heinz ketchup in.  We’re a strange lot here in the ‘Burgh but we are some of the most amazing folks around. So yes this being a Pittsburgh Steak wedgie gets fries.

Next came the chopped lettuce, tomatoes for him (since apparently I was being forced to share this) and condiments.  Now if it were all mine, like it was initially meant to be I would have added ketchup before closing it up.  Yes I said ketchup. I eat ketchup on my steak.  Quit making that face! I am not “ruining” it. You put steak sauce on your steak right?  Well EWWWWWWWWWWWWW to you!  LOL  But since I had to share this I closed it up, cut it up – 1/3 for me and 2/3 for him.  I opened mine back up and loaded it with ketchup.  He opened his up and put *gag* mayo on it.  God I hate that stuff. So the pictures you are seeing here are actually the 2nd wedgie I had to make. See the recipe makes 2 but I had only planned on making one.  Since I had ‘help’ devouring this one there was nothing left.  See that pan it’s on?  Yeah those crumbs aren’t from this wedgie.  They are what was left of the first wedgie. I’m surprised we didn’t fight over licking the pan clean!

This seriously is amazing!  So if I wanted to mix it up using steak what else could I put in it?  Well for starters crispy bacon while it’s cooking.  We used to make that all the time in the pizza shop – steak with caramelized onions and cooked bacon. Seriously I don’t think there is a better smell on earth. I mean that is right up there with new car and new baby smell. LOL So tell me… what’s your FAVORITE hoagie to order/eat?

If you know how it’s made (meats, cheeses, toppings) then you can make it into a wedgie.

My all time favorite wedgie would have to be steak, crispy bacon, 4 types of cheeses, whiskey glazed portabella mushrooms and onions baked then filled with crispy sea salted fries, lettuce and ketchup… lots of ketchup!