Growing up we always had gardens in the summer. My job was the one to sit and pick the beans and peppers off of the plants since I was closest to the ground.  As I got older I was in charge of tomato worms… that is until I saw my first one and pretty much screamed bloody murder. I can remember my Dad handing me a ginormous safety pin and saying “Lor this is how you get ’em off the plant and this is how you smush ’em”.  Yeah.. imagine this blonde hair blue eyed girl with ringlets watching her dad harpoon these mammoth things with a safety pin then smushing them in the dirt.  Worms my butt!  Them suckers were prehistoric snakes!  All green and horny.  NO WAY MAN!  I wanted NO PARTS of them things!  Perhaps that’s where my aversion to tomatoes started.  Hmmm… However today I sorta eat tomatoes more and more.  I won’t eat them raw but I’m getting more adventurous with them.  Like I’ll eat them roasted… as long as they are stuffed with spinach and cheese or on a pizza… as long as they are covered in cheese and garlic! Our meals were simple; honest.  We ate what we grew and at times we may not have had meat in the freezer so Mom made us other stuff.  This dish, her Garden Pasta, was one dish she would make.  Now granted as a kid I was EXTREMELY finicky!  I mean EXTREMELY doesn’t even come close!  So I’d get a bowl of it with just noodles, broth and corn.  Plus 800 pounds of cheese.  I mean cheese is the bomb!

So when she made this dish she put in whatever was in harvest at the time.  Zucchini, squash, peppers, green beans, potatoes… literally whatever was in harvest went in the pot.  And when Mom made this she would use the HUGE canning pot to make it.  She would make 5-7lbs of pasta at once and quarts of chicken stock (as that’s what she canned) plus a bushel basket of veggies.  And yes, you read that right…5-7 pounds of pasta at a time.  I had 4 older brothers that played sports and that were HUGE.  Each could easily eat a pound of pasta themselves plus a loaf of bread.  They called it ‘football conditioning’. LOL As you can see this dish is pretty simple.  You put everything in the pot, cover it with stock (I use vegetable stock but you can most certainly use chicken or beef though go with low sodium or home made), cover, bring to a boil, uncover and then simmer for 15 minutes or so.  The best part.. NO DRAINING!  The liquid cooks the pasta but doesn’t dissipate completely so you have a great sauce.  The tomatoes add that thickening agent you want. Plus I add just a bit of cream to mine but you don’t have to.    The more stock you add the more sauce you’ll have however if you add too much it won’t be thick so you may have to thicken it with a slurry of cornstarch and water though I prefer using cream and cheese.

Yes again with the cheese! But the best part about this bowl?!  Under $5!  Yeah I know, right!  Totally love that store and this bowl!

So HomeGoods if you’re reading this, we NEED to talk! It’s funny as the older you all get, since I don’t age at all, my taste buds evolve and mature.  As a child if you put this as-is in front of my face I would have squinched my nose up so far that it would have pretty much touched my forehead.  I just hated veggies like this.  Like real veggies.  Corn and potatoes weren’t considered veggies as they were icky like say onions or tomatoes.  God how I so wish my parents were still alive to see this and see how I eat now.  That I have gone past macaroni and cheese or peanut butter and jelly sandwiches (which still are 2 of my favorite things in the world).  That I will eat stuff like this on purpose and not for money though if someone wants to pay me to eat it I will! Wha??? *bats her baby blues*  A girl has to make money somehow and walking the streets isn’t an option. Mr. Fantabulous said no anyway.  LOL j/k…seriously! Now if you have any leftovers this dish reheats really well!  Actually I loved it just as much the next day when I had it for lunch. I just reheated it and it was super yummy and creamy.  The pasta doesn’t get gummy like some leftover pasta does. Now for Mr. Fantabulous I grilled up a chicken breast, sliced it down and put that in his bowl just because he eats a crap-ton (yes it’s a Lori word) of protein daily.  Actually more than me.  However I wasn’t feeling chicken at the moment so I went with this and later on in the day I had my protein shake (which I friggen LOVE!).

If you didn’t want to cook the chicken separately you can add in cubes of raw chicken in the beginning of the recipe and then before you add the cream, skim off the fat/bubbly stuff at the top. The chicken poaches beautifully in the dish.  I haven’t tried this with beef or shrimp.  However with shrimp I would add that towards the end of the simmer and use seafood stock instead of vegetable stock.  Same with the chicken – use chicken stock. This is one of those dishes I had forgotten about my Mom making every week in the summer growing up.  It wasn’t until I saw variations of these surface on Pinterest that it immediately brought back those summers I spent hours in the garden with my family picking produce.  Mom would have on her blue and white checkerboard apron with the 2 pockets in the front and as she was gathering veggies she would grab the bottom of her apron and fill it up to the brim almost like a sling.  She would then walk down through the field to the house dropping stuff along the way however she knew I was following right behind her picking up whatever she dropped as best I could.  And since I didn’t have an apron on I would use my shirt and stuff as much in it as I could mimicking her apron sling which meant 90% of the time my pudgy pot belly was showing.  However we really didn’t have neighbors that were close since our house was in the middle of ~41 acres.

I’d make a few trips back and forth the path picking up what I dropped and told her every time to not start anything without me cause I wanted to help. Even at 4 years old I wanted to be in the kitchen with her.  My job for this was to wash the veggies and then peel the husks and silk from the corn cobs.  I wasn’t allowed until much older to chop up the veggies. I would steal handfuls of fresh cut off the cob corn though.  Now at the time I would have bet you my favorite Barbie that Mom never knew but she did and more often than none I’d find a pile of corn on the table that she ‘forgot’ to put into the pot. 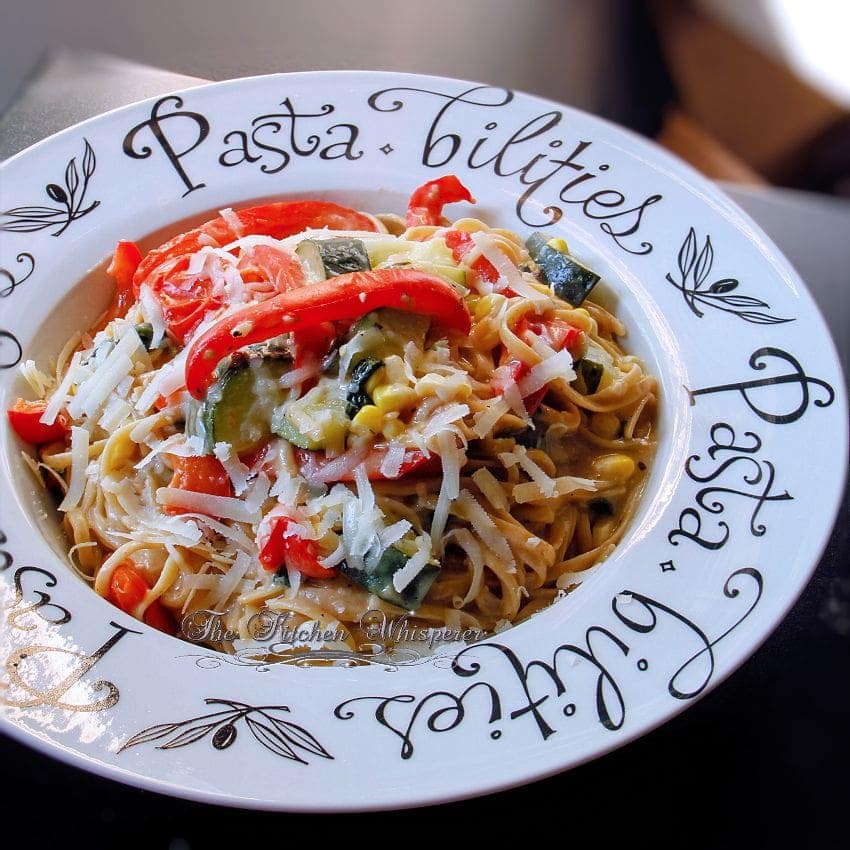 She’d holler up to the fields for the rest of the family to come and eat.  While this dish looks simple it’s anything but simple in flavor.  It’s amazing!  She would serve this with fresh from the oven warm white bread slathered with sweet cream butter.

What I wouldn’t give to have her and my Dad back right now just so I could cook this for them and let them see just how much they inspired me.