This soup… oh this soup! Now Chicken & gnocchi soup is not new. I’m sure we’ve all either heard of it, had it at the chain restaurant that first made it famous or found some pseudo attempt copycat recipe on the internet.  This is none of them.  Why?  It’s BETTER than that chain restaurant. Yes, I’ve thrown the gauntlet down.  Don’t get me wrong, I like that soup but it’s inconsistent when I order it.  Either it’s thick as mud, it never has chicken in it, it only has a single gnocchi or it’s thin as water.  Occasionally it’s on the money and I love it but it doesn’t always happen that way sadly.   Sorry I like you but when it comes to food, it’s about quality AND consistency here folks. But I have to give mad props for your salad and breadsticks.  AWESOME!

When it was butt cold out here in Pittsburgh all I wanted was soup but after a while you get tired of the same ol’ soup.  Sure I’ve give you tons of soup and chili recipes on here but I really was craving this soup.  Now one of the things I pride myself on is having a very distinguishable palate. I can pick apart ingredients in a recipe fairly easily even the most obscure ones.  To date there has only been one ingredient I couldn’t figure out from this one Chinese restaurant.  They made these house rolls with a funky ‘twinge’ to it.  I asked what it was but unfortunately there was language barrier issues.  Now I didn’t want to remake their recipe as it sucked (sorry to be blunt but it was pretty nasty… even Mr. Fantabulous wouldn’t finish his and that man would eat rocks covered in sauce) but it bothered me that I could never pinpoint that one spice. Thankfully I had all the ingredients on hand (bonus) and a very empty belly (double bonus!).  This soup is truly super simple to make though it does require a bit of your attention when you add in the flour and whisk it in.  Another thing is when you pour the milk/cream in is to do it SLOWLY and not just dump it all in.  If you dump it all in you run the high risk of flour lumps and your soup not being creamy.  Take your time and slowly pour while whisking the whole time.  It takes some coordination but you’ll get it.  If you don’t have coordination (like yours truly) have someone help you.  It’s awesome to cook with someone! Now I could have certainly went overboard and added a ton of other things in this recipe but I honestly wanted to keep as similar to the restaurant one but… only better; MUCH BETTER!  First I wanted to see if I could make something similar to it but the result is that it wasn’t similar, it was better!  This is so creamy and luscious with chunks of chicken, tender gnocchi, bits of spinach, carrots and that one secret seasoning that most other recipes missed out on. I made about 6 quarts of this soup the first time I made it and literally ate every last bit in 4 days!  It stores beautifully and reheats perfectly.  I reheated it on the stove and in the microwave and both options left it just as awesome as the day I made it. This recipe isn’t on the lighter fare however you can skinny it up by using fat-free half and half in lieu or the milk and heavy cream. With this I opted to use fresh baby spinach instead of frozen spinach.  I just am not a fan of that stuff. First it’s a pain to work with as you have to drain it and then squeeze it like a bajillion times only to end up with a 1/4 cup out of a 16 ounce box.  And it’s messy and just looks gross.  No with this soup, the fresh baby spinach leaves cook down leaving you with beautiful pieces of spinach in the mix without having the colors muddle the creamy base. As you can see with this I opted to go with some homemade garlic Parmesan focaccia in lieu of breadsticks.  I wanted something that had some weight behind it to stand up to being dunked and acting as a caveman-like utensil.  Hey it’s all about shoveling this in.  LOL  No honestly, it’s all I had on hand.  And thankfully I did as it was awesome!  It paired beautifully with this dish.

Normally when I make a recipe I plate it, do the photo shoot first then eat the warm and or cold food in that bowl. But this dish, no way man, this dish deserved to be eaten hot and fresh out of the pot.  As I scooped up  my first spoon I always manage to get a bit of everything on the spoon – some spinach, carrots, gnocchi, chicken and some of the cream base.  Seriously that was probably the best bite of soup I’ve ever had.  It even shocked me on how unbelievable it was.  I mean I was hoping for something similar but this, dear lord this blew it out of the water! I mean did you ever eat something that was so good that you made that it even surprised you?  That was this dish.  It was as if the soup gods were in perfect alignment, the sun shined down on me and I was anointed with that golden soup ladle.  HAHA well okay not quite like that but this was heavenly if I do say so myself!  LOL  With this dish you need to start with already cooked chicken.  For me I just took some boneless chicken breasts and boiled them in some broth with onions, celery and carrots – kind of like how you start off with chicken soup.  The broth I kept for another dish as I already had stock out for this recipe.  Now if you didn’t want to go with that you could easily go with store-bought rotisserie chicken and use that however make sure it’s not bbq flavored or some other flavoring that wouldn’t fit well with this dish.

For the gnocchi normally I made homemade but again I had a package on hand that I like so I just went with that.  I used potato gnocchi and if I made it from scratch I would go with potato as well.  I’m honestly not too sure how ricotta gnocchi would go with this.  It could add another layer of creaminess but for now I’m sticking with the potato gnocchi. Now I don’t want to discourage you from ordering this from that restaurant as I still will when we’re out and Mr. Fantabulous gets a craving for a huge salad and breadsticks but trust me, once you make this yourself you’ll be hard pressed to order it out anywhere else.  So I’m sorry if I broke you from ordering this out ever again but your tummy will thank me. 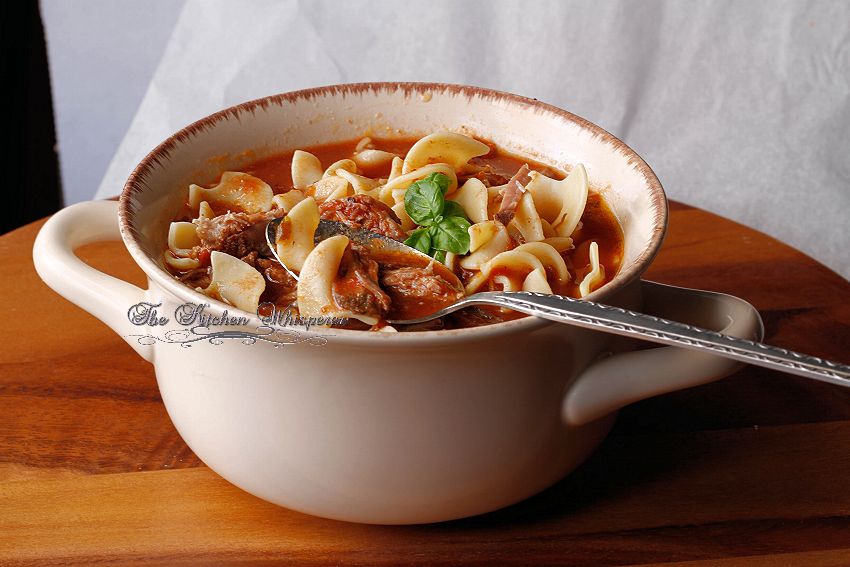