So the other day I was in the grocery store and it wasn’t my normal grocery store I hit up like 3 times a week.  This was one of those bigger fancy schmancy grocery stores.  I mean I felt like I walked into Beverly Hills by how laid out this one was.  Now don’t get me wrong. I love my local market but this one had EVERYTHING!!! I mean it was bright and ginormous and more varieties of things.  I honestly think I could have spent the entire day in there just roaming the aisles!

Well in the produce section I came across some of the most gorgeous cucumbers and tomatoes. I KNEW I had to make something with them.  I mean HAD to! So I filled up my buggy (yes, that’s Pittsburghese for ‘grocery cart’) and home I went. When I got home I got to chopping and mincing, sauteing and whisking. This salad took under 10 minutes to put together and pop in the fridge.  Now I tasted it prior to putting it in the oven and I was loving it! I had every intention on having this for lunch. However… because there is always a however with me, this house had other ideas for me.  I cut the grass and then Mr. Fantabulous proceeded to come out side with a scowl on his face. He was mad; like fuming mad.  I thought for a split second “Crap!  What did I do now???” and that since I was on the tractor I could make a break for it riding off into the sunset… going at a top speed of 8 mph!  LOL So as I got up to him you could see the utter look of disgust and po’d-ness on his face.  I asked what was wrong and he told me that all that work we did back in October to strip the paint off of our pool (it’s in-ground) and the repainting was for nothing.  We had to re-do it AGAIN!  Now for those of you that have ever done this – working with muriatic acids, some tri sodium phos something or other, this chemical and that chemical and good old fashioned elbow grease, it SUCKS!  It took us almost a week just to do that!  Then we had to let it dry for a few days THEN we had to paint it.  Thing the paint fumes were horrific (did I mention I had asthma???) and it’s ridiculously expensive!  Like $100 a gallon expensive!  All that work… for nothing!  Ugh!  We did contact a bajillion companies to come in and do it professionally but no one would and those that would, wouldn’t give a warranty and wanted way over $10k!  Um no, no thank you! I’d rather make it a skate park at that point. So he started to drain the pool however we both forgot that the pump was on a timer.  Yeah, you know where this is going, don’t you?  Yeah the pump shut off when there was about 200 gallons of water left in it.  Yeah… great!  NOT!  We had to use 5 gallon buckets and fill them out and dump them ourselves.  He would fill them up, walk out from the deep end, put them up on the ledge and then I would carry them out to dump.  I think we did about 40-45 trips.  Did I mention that 5 gallons of water weighs over 40 pounds???  Yeah, yours truly lugged them puppies up from the ledge and up and over a wall.  Thank GOD my butt has been working out is all I have to say.

Now back to this salad that was just begging to be eaten.  By the time we were all said and done it was maybe 10ish.  While I was starving I was so sore, like to the point I wasn’t sure how I was going to make it to the shower sore, the last thing I wanted was food.  So the salad sat in the fridge over night – unloved.

I mean she’s so pretty!  So light and bright! I’m happy to inform you that this unloved no more!  THIS was part of my breakfast!

And it was DELICIOUS!  For me I added just a trace more sea salt (maybe because I was craving salt) but it will brought out the flavors in this!

And I love the fact that it wasn’t runny – ever  make a cucumber salad only to have it all watery on the bottom? You need to draw out the water first so it’s super important you follow steps 1-3 otherwise you’ll end up with a pool of liquid at the bottom of your bowl! 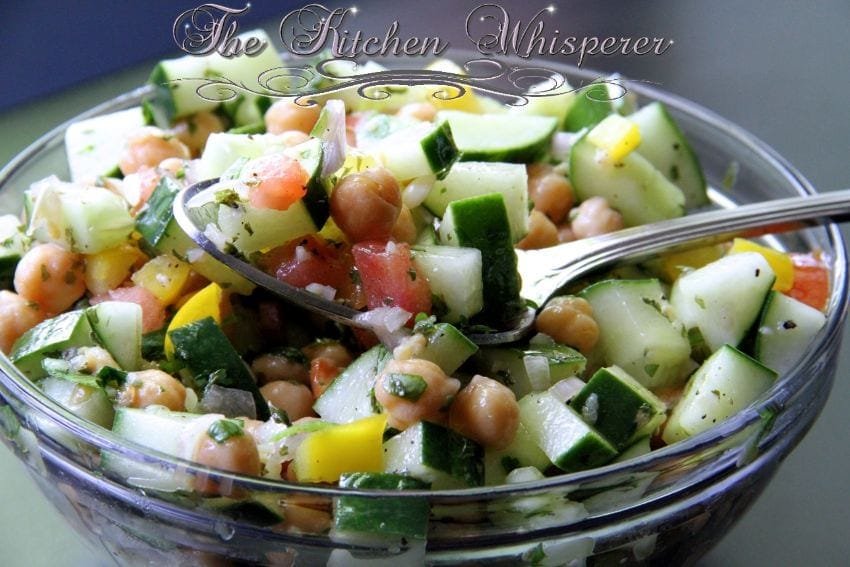 You know you want this!  This is PERFECT for any summer BBQ and cook out!