So one night Mr. Fantabulous said “Honey can you make me a Sausage ‘n Pepper Sandwich like my Mom used to?”  Now I had never seen this sandwich and to me when I think of sausage and peppers I think of hot sausage in a pepper & onion red sauce OR that stuff you get at a carnival where they just grill up veggies and hot sausage. I ask him which one of those he wanted and I swear he looked at me like I had 2 heads and spoke a Latin.  I got the “No, that is NOT what my MOTHER made.” and proceeded to wander in to the other room. 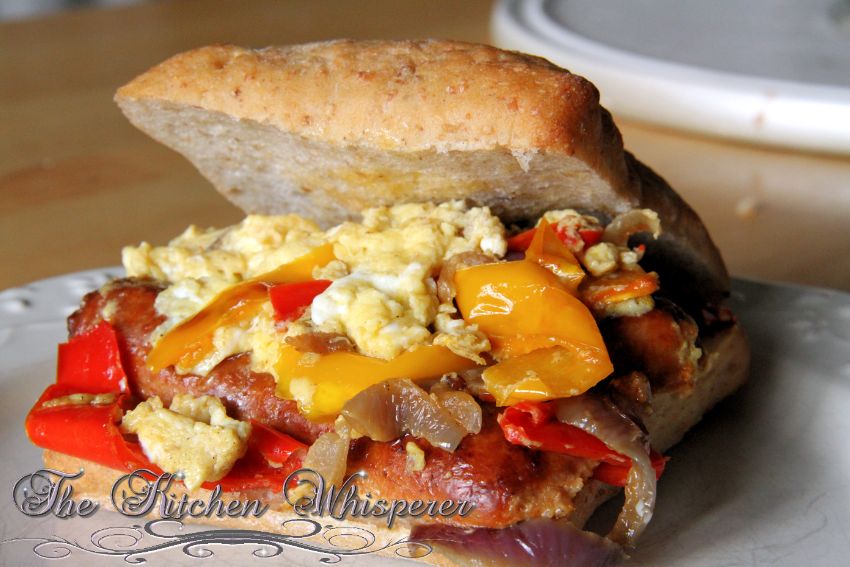 There I stood, frying pan in one hand, bag of hot sausage links in the other and the most confused look on my face.  I proceeded to follow after him (still with pan and sausages in tow) asking 9, 473 questions about this mysterious sandwich.  After 20 minutes of my trying every way to get him to explain this sammich other than it being described as “super soft peppers and onions with hot sausage and an egg in it”. Wait wait??? Egg???  Onions?  WTP???  You just said Sausage & Pepper sammich. WTH did onions and eggs come into play?  Grrrrrrrrrr.. men! Since he literally was of NO HELP I took it to our TKW Facebook Family asking for tips on this mysterious sammich.  All I can say is that I am TRULY blessed by having them all in my life.  Within minutes I had well over 300 responses about how to make it and what he was ‘trying’ to explain to me.  As I was making it I made Mr. Fantabulous come out to the kitchen and watch me as I made it; to ensure that it was right because God knows that man is RIDICULOUSLY picky about how ‘tings are made especially when they are ‘tings his Mom made. So while these were cooking I’d ask question after question (apparently I found my husband’s annoyance level and blew leaps and bounds past that.  LOL). I mean I wanted to make it perfect for him and the only way to learn is to ask, ask, ask.  Right?

Finally when it was all done I sat it before him and waited. Yes I held my breath. I don’t do it on purpose.  I think it’s more subconscious than anything.  And knowing my husband and the little brat he is, he just sat there and ate s – l – o – w – l – y like SUPER slow and refused to make eye contact.  Finally about his 3rd bite in (which I swear took 47 minutes to get to) he set his sandwich down and reached over and patted me on the head, pick up his sammich and continued to eat in silence. Yes, you read that right… HE PATTED ME ON THE HEAD!  Now imagine the look of shock on my face 1 – for him to pat me on the head and 2 – for him to not say a word!  So I stood up, grabbed the sammich out of his mouth (he was in mid bite) plus the plate and proceeded to walk to the trash to pitch it.  Now even though I couldn’t see his face I know he had a ‘WTH!’ shock face on while I, with my back to him, was grinning from ear to ear.  See 2 can place that game! Finally he spoke with a “WTH are you doing?  Give me my sandwich back!” to which I responded with “Well I figured since you just patted me on the head you were inferring ‘nice try but this sucks however I’ll appease you’. I didn’t want you to force yourself to eat something crappy.”

What happened next involved me being chased through out the house, plated sammich in hand while Mr. Fantabulous trying to get it from me.  Apparently I am that fast as I was running all around laughing so hard.  Sadly for me, when I laugh any other physical activity stops as I can’t do two things at once.  The harder I belly laughed, the slower I got until finally I just stopped, bent over, plated sammich in the air with tears of laughter falling down my cheeks.

So did he like the sammich?  Nope; he LOVED it!  He told me to not change a single thing about it however he recanted that and said that I was never allowed to run off with his food like that.  LOL