So SOMEONE (not mentioning any names… darling sister Dianna) said the ‘C’ word to Mr. Fantabulous.  The ‘C’ word in my house is Crepe.  See Mr. Fantabulous LOVES crepes beyond words. Now it wouldn’t be such a big deal if he ate a normal amount however there is nothing normal about his consumption of these.  At a minimum I have to make 12 at a time.  He literally inhales these and most often does what he can to stand next to me at the stove, 2 crepe pans going at once eating them as soon as they come out.  And God forbid someone does mention the ‘C’ word (darling sister dear) and I don’t make him them that day.  You’d think I done shot the dog, deprived him of Christmas and wrecked his Camaro. Yes folks I married a man-child. LOL  No seriously it’s our playful little ways with each other.  It makes life fun and cute. So as I made him my Classic French Crepes I decided *I* wanted to play with the recipe a bit for me. I mean I get tired of the same ‘ol, same ‘ol. Plus I wanted chocolate… for breakfast. Hey!  Don’t judge me!  Women are allowed to have chocolate for breakfast! It’s like the law or in wedding vows.. or something like that.

As I prepped his batter I decided to make a chocolate version for me.  Yes, it was the night before; wasn’t even breakfast time and yes I knew I wanted chocolate for breakfast.  It’s a girl thing; go with it. It’s kinda like when you meet your soul mate.  When you know, you know! Now by the time I was whisking together this batter Mr. Fantabulous came out to the kitchen for his nightly snack he saw me making something.  Now he already knew I was making him crepes HOWEVER…

yes, there’s a however… he THOUGHT these were his. Now this man is pretty adventurous when it comes to trying new foods. I mean look who he’s married to.  He has no choice to try new stuff otherwise it’s “hello Cheerios!” for dinner.  Well okay that’s not entirely true. I’d most likely make him his own stuff.  Yes, he’s spoiled but it’s what I do.  As he stood there making the face I just whisked away all the while giggling on the inside.  I so love messing with him. I know, I’m evil *wink*.  Finally he said “Woman (again with the woman thing), I thought you are making crepes for tomorrow.  WTH is that chocolate stuff?”

Without missing a beat I said ‘Chocolate crepe batter honey.  I’m in the mood for chocolate for breakfast.  I want to try something new.”

Oh yeah this went over like a lead balloon with him. The look of “HONEY how could you!!!” was just too priceless.  Seriously this man is so unbelievably sexy and when he gives me that innocent sad face it’s all I can do not to just grab his face in my hands and smother it with kisses. Now I can be cruel (in a fun way) but it doesn’t last long.  I just told him to open up the fridge and look. There he saw 8 cups of crepe batter just for him.  Yes, 8 cups. Now if you’re wondering how many crepes 8 cups makes… um, a lot.  No, like A LOT! But per Mr. Fantabulous there are never enough crepes.  Ever.  So off went both batters into the fridge to rest overnight and my butt went to bed. The next morning while he was off in sleepytown I got to working on these.  A quick stir of the batter and in the pan some went.

In standard crepe fashion these cook up in no time (which is probably one of my favorite things about making them). I had bought some Hershey’s chocolate cream spread and knew I had to put that in these.  Just a Tbl or so smeared in this chocolately piece of breakfast was all it took for me to fall in love! These crepes are light and tender with a great chocolate flavor! I wanted over the top chocolate flavor thus is why I went with the chocolate cream filling.  However after my 2nd one I felt guilty.  I mean it’s chocolate for breakfast. I could justify it being good for me, healthy and what not if it had dark chocolate in it but it didn’t.  So I put in some fresh raspberries.  These added a great tartness to the cocoa flavor.

Wait a minute!!!  OMG I’m a genius!!!  This has cocoa in it!!! Cocoa has a TON of health benefits!!!  In addition to decreasing blood pressure and improving blood vessel health, consumption of flavonoid-rich cocoa decreased “bad” LDL cholesterol among people under age 50, and increased good HDL cholesterol.  Flavonoid-rich cocoa consumption also was linked to reductions in risk factors for diabetes — a major risk factor itself for cardiovascular disease.  Also, resistance to the hormone insulin, which helps regulate blood sugar, favorably dropped among people who consumed flavonoid-rich cocoa, compared to people in comparison groups.  Further, consumption of flavonoid-rich cocoa did not change triglyceride levels of study participants or make them obese. Triglycerides are a type of blood fat that have been linked to coronary artery disease when levels are elevated above normal. AH HA!  You CAN have chocolate for breakfast and not feel guilty!  Um….you’re welcome!

Now for some of you the chocolate cream may be too much chocolate (is that even such a thing??? Too much chocolate???) so I went with my basic sweetened cream spread filling (I used this one without the cinnamon). OMG FABULOUS!!!  It reminded me more of one of those boxed desserts you buy.  Chocolate cake with a cream filling and then rolled into a log!  All this needed was covered in chocolate coating! 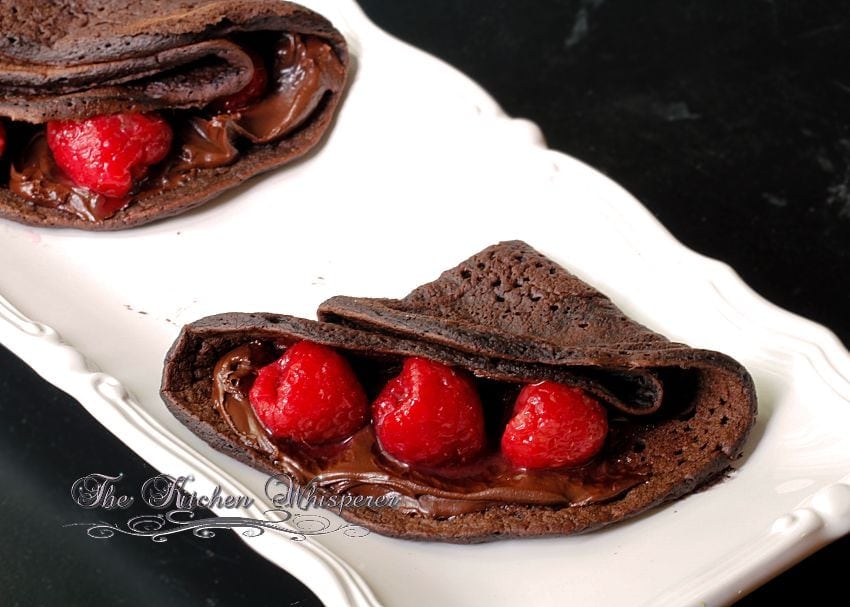 Now after eating 4 of these babies … I mean I had to taste test them for you guys just so be sure they were TKW-worthy.  I went with 4 different variations: chocolate creme, chocolate cream and raspberries, sweet cream filling and sweet cream with raspberries.  Honesty I can’t say which flavor I loved the best as they all were equally amazing. They totally satisfied my chocolate craving and I got my breakfast fix satiated!

As I was cleaning up the pans Mr. Fantabulous came out to the kitchen rubbing his sleepy eyes and letting out such a huge yawn. However it’s funny because as soon as he saw the crepe pans this man was bright-eyed and bushy-tailed! And just like always he stood right beside me “helping me out” by rolling them and inhaling them just as fast as I could make them.  LOL  #solovethatman What started it all…