If you’re looking for a seriously delicious veggie burger then look no further! This white bean and corn veggie burger flavorful, packed with incredible spices and roasted red peppers!

So this recipe came out of my love of ‘bean’ burgers.  See a few weeks ago my bff and I were at lunch at this local place in Market Square.  Now while I’m not a huge fan of their food (well okay to be fair, their food is decent it’s their prices that I loathe).  Seriously $20 a person for lunch (sandwich, fries and a soda) is ridiculous.  But again, it’s town and that’s kinda the norm (not my norm but the norm nonetheless). While there I spied a black bean burger with a spicy remoulade. Well, me being a food snob I had to try theirs.  Theirs was pretty good but it wasn’t moist and had way too much filler for my liking.  Their remoulade was too mayo-ish which you all know I’m not a fan of at-all. BUT that inspired me to make a new black bean burger. That upcoming weekend I was hell bent on making a veggie burger.  The thing is there are 900 bajillion black bean burger recipes out there and yes I have one as well (though mine is friggen FANTASTIC if I do say so myself!), I wanted to do something else. Digging through my pantry I found about 15 cans of beans varying of different types.  I spotted my Northern White Beans and realized that I honestly didn’t think I had ever seen a recipe for one.  I’m sure they are out there.  I mean it is the internet.. everything is out there. Before I started working on this recipe I worked on my Satan Chipotle Remoulade Sauce. Once I made that (and recovered from the extreme heat of the first batch) that taste gave me inspiration as to what seasonings I wanted to go in this.  One thing I didn’t want in this was a ton of filler.  I wanted this to be juicy and flavorful like a “real burger”.  If I wanted it with a bunch of filler I would have made another veggie meatloaf. The first key to making a really juicy veggie bean burger is to mash at least half of the beans.  That’s what will help hold them together and keep moisture in. The next is the addition of eggs.  Now for those that can’t use eggs, you can easily use an egg substitute or tofu. When I mashed the beans up and seasoned them they just looked blah. No excitement, no wow.  I grabbed some fresh corn kernels from this summer’s garden that I had cut off of the cob and flash froze, some roasted red peppers and green onions.  These looked pretty now.  All the varying colors and flavors.  Instead of using bread or breadcrumbs I opted to go with Cream of Wheat (I’ve always made these gluten-free with Cream of Rice and they taste the same). The cream of wheat almost ‘melted’ into the mixture holding it together but without that binder taste. 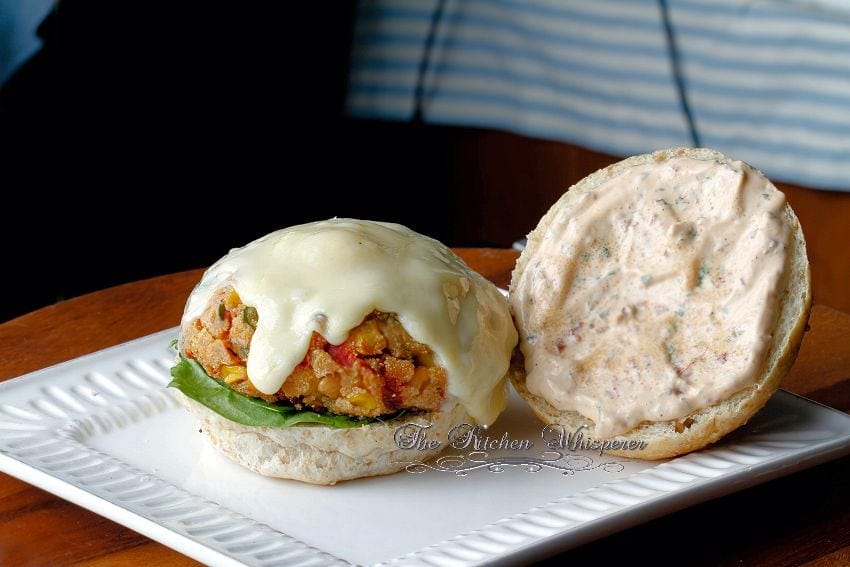 I’ve made these 2 different ways – baked of which I put them on a lightly sprayed piece of parchment (on a pan) and sprinkled some corn meal for texture and then also pan-fry. To pan fry, form your patties and let them chill out in the fridge for about 30 minutes.  That’ll help them retain their shape.

As you can see I was rather hungry when I made these puppies as they were HUGE but honestly I didn’t care as they are healthy, packed with protein and nutrients and flippin’ so delicious!  Honestly if I didn’t like bacon as much as I did I really think I could be a vegetarian as, for me, these burgers are addictive!  I’ve been making them about every 2 weeks just for me.  I’ve made that as these Jethro-sized burgers, to sliders to even meatballs when I’m on the go. But let me back up a bit to my first bite of these on the sandwich with the Satan Sauce.  I grabbed one of my whole wheat rolls, slathered that stuff on both sides, topped it with some baby arugula and went to  put the patty on the bun when I realized it was nekkid.  Nekkid as in no cheese.  I’m sorry but if you’re a burger it’s like a law to have cheese.  Even if you’re an Italian style burger with red gravy, you NEED cheese.  So I hurried up, turned on the broiler, cut up some Chihuahua cheese, put some on top and broiled just until it was all melty and gooey.  Are you familiar with this type of cheese?  Chihuahua cheese is a Mexican semi-soft cheese made from pasteurized or raw cow’s milk.

Chihuahua cheese has a semi-firm texture and is pale yellow in color, unlike many other white Mexican kinds of cheese. A mild, buttery taste with a near cheddar like sharpness is a characteristic of this cheese. The flavor is very similar to that of mild, white cheddar or Monterey Jack. As it is a good melting cheese, the richness and suppleness of Chihuahua cheese is preferred in baking dishes, fondues, pizza, and lasagna or casserole dishes Once I assembled this and took my bite (as shown above) it took every ounce of restraint to not finish this thing.  However, my love for you all came first over my grumbling stomach.  I went and grabbed the camera, snapped a billion pics (as you can see by my excessive pics in this post) and kept sneaking pieces the entire time.  Trust me, there is a reason why you only this side of the burgers. I kinda nibbled on the backside.  *blush* Finally I was all done and able to sit down and savor this sandwich.  I say savor as I had to eat it slowly. I’m telling you guys, that Satan Sauce is brutal but dear GOD it’s amazing!  It was the perfect topping for this burger! This burger, with its spices had a Mexican type flair which I so loved.  I don’t think I could have made a better white bean burger.  I’m not sure this would work well with black beans.  While I love them equally to me I can taste a difference between the two.  Black beans at the time almost have a ‘muddled’ flavor if that makes sense.  Not muddy but muddled meaning they are more earthy flavored. White beans are light and mild in flavor.  Because of that, the flavors of the seasonings and veggies were in full effect! I mean seriously, LOOK AT THAT burger (either above or below!)  That melty cheese, that Satan sauce and those bajillion pieces of veggies and spices!  It’s a true flavor explosion in your first bite!  Honestly, as I’m typing this I’m truly craving one! I think once I get home from the gym tonight I am going to whip up a batch.  See with these types of burgers you can do that.  You don’t have to let them rest and come to room temperature like you have to do with most other meat burgers.  Cold meat for a burger can often lead to a tough patty.  Not these babies!

I know a bunch of you will ask if you can make these up and freeze them. Yep!  I’ve done it countless times.  Unfortunately, I WISH I had some in the freezer as I’d make one now but I don’t. Tonight I will though.  It’s chest night at the gym and these are simple enough to put together even after a killer workout! So even if you’re a hardcore meat eatin’ burger lover, I’m telling you… try this one WITH the Satan Sauce.  My next incarnation with these is to make them as meatballs and put them in a Fra diavolo sauce and maybe quinoa or rice.  Sure you can do pasta but I want to keep these gluten free as much as possible.  No, I’m not one that needs gluten free diet but thousands of you are so I do my very best to accommodate everyone. What I did do the one weekend is make these as party meatballs.  On each one, I melted a little cheese, topped them with some arugula and a trace of the sauce.  I stuck a toothpick in each one and sat my butt down in front of my tv and had an awesome chick flight night all by myself while Mr. Fantabulous was at band practice.  Eating these allowed me to have some junk food later.  I mean it’s a chick flick night.. junk food is a requirement! Print Recipe
Pin Recipe
★★★★★ 5 from 9 reviews
Did you make this recipe?
Leave a review

I garnished mine with melted Chihuahua Cheese and baby arugula.

For more veggie burgers check out these!