These Butterscotch Sweet Potato Raisin Muffins should be called Dessert Breakfast Muffins as they are perfect for breakfast but also perfect for dessert.  They are seriously delicious, ridiculously moist and one of the best muffins you’ll ever eat!

So I have this girlfriend that I met a hundred years ago who was so teeny in stature but had the most insane sweet tooth.  She introduced me to many things when it came to food and eating.  Her daily foods were broken up as such: Breakfast, Breakfast Dessert, Lunch Junior, Lunch, Mid-Day snack, Dinner Junior, Dinner, and dessert.  And throughout the day were rogue pieces of candies.  And she was teeny and kinda sorta exercised but she didn’t have to as she had the most insane metabolism.  Now I mention her as while I was coming up with this recipe I wasn’t sure how the taste would be – would it be savory, sweet – could it be muffin enough?

I mean let’s look at the ingredients – roasted sweet potatoes.  Up to a few years ago, I wouldn’t be caught dead eating one of these things.  They were just ‘weird’. They weren’t the type of taters I grew up on however Mr. Fantabulous loves them so I had to buy them.

When I finally gave in and tried one it was like love at first bite!  Now I’m obsessed with them and easily go through a 5lb bag a week. Next in this recipe, we have raisins because I wanted to go with some texture and color other than well, burnt orange.  You could omit it and go with chocolate if you wanted or even dried cherries.

We then add in the basic staples – flour, brown sugar, leavening, salt, eggs.  When I mixed it all together it was good but was just missing something. So the batter sat on the counter for a few while I opened up the fridge to grab a soda.

As I was closing the door I spied a jar of opened butterscotch topping.  I closed the door, stopped, re-opened it and pulled it out. “Hmmmm… would it work?” So like any good cook, I took some batter on a spoon, poured on some butterscotch and tasted it.  OH YEAH… it works!  So into the bowl went the butterscotch.

If you recall, a few years ago I shared with you the Bakery Secret to getting Sky-High muffins as you see here. By baking them this way you’ll get sky-high muffins every time.  *Disclaimer: this is assuming your leavening agents aren’t outdated or you overmixed the batter and caused the gluten to activate in your flour. Now I’ll ramble more on how incredible these taste later but for now I need to chat with you about how this recipe came to be and the whole debate I had with Mr. Fantabulous over these muffins.

Like some of my recipes I get inspired by stuff I have in the fridge; leftovers that either I’m sick of looking at or stuff that’s just on the verge of “going”.  I’m not a girl that’s really into leftovers nor am I a girl that can make just 2 potatoes.  No, I’m that girl that needs to roast 4-6 at a time plus regular potatoes AND have something cooking in the pressure cooker AND on top of the stovetop.

It’s a small, but delicious, obsession. Oh, trust me I used to be way worse.  I blame my upbringing. I swear the saying “cook for an army” started in my household as my Mom cooked so much food for every single meal that it was unreal.  Now granted we had a pretty big household – 8 people but we also had the neighbors, friends, and heck even a traveling salesman got fed.  Mom didn’t care who you were – if you were in our house you ate. …and you had at least one plate of food to take home with you.  That’s just how Mom did things.  And when Mr. Fantabulous and I got together that’s how I initially cooked. My fridge would be packed with at least 3-4 different full-sized meals (for a family of 6) at one time plus desserts, bread and whatever else I felt we “needed”. Back to these muffins and the debate. I’m standing in my kitchen with a million things on my counter – flour, eggs, sugar, leavening and so forth.  Plus a plate of roasted sweet potatoes.  Mr. Fantabulous comes out to the kitchen, takes a look at the counters, shakes his head and starts to walk away. He stops, turns around and says “Hey babe, I’m kinda burnt out on sweet potatoes.”  Great… as I still had 2 left in the fridge.  I wasn’t feeling them either but he’s like my human garbage disposal.  The man would eat rocks if they were covered in pasta sauce.

So I said “Fine, I’ll just use these in a muffin.” And then the debate occurred.  “You can’t use that in there.  They will taste yucky. I’m not eating them. You’re crazy.” is what I heard.  I explained how I often use them in dishes without him knowing to add a thickener and some sweetness. Again, I hear I’m full of it.  He then says “Well I bet you they will not taste like a muffin.  They’ll just taste like sweet potatoes and that’s it.”

I throw everything in the bowl and taste the batter as-is.  It’s good but as I said above, it needed something more.  Along comes that rogue butterscotch sauce.  Oh yeah!  As Guy Fieri would say “That’s money!” Anyway, once they are done and cooling he comes out to the kitchen, rubbing his tummy as he’s hungry.  Yes, I married a 6-year old.  LOL  It’s my own fault, I spoil him though I 100% blame Mama Fantabulous for starting it.  I had to continue it. LOL

Actually he’ll make his own stuff and me as well but I don’t mind; actually I enjoy doing it.  So while the muffins are cooling, we have a late breakfast and you can tell by the look on his face he’s still hungry.  He wants a snack. Yes, a snack AFTER a meal.  Don’t ask… just shake your head as I do. He keeps looking around the room and I can see him checking out these muffins from the corner of his eye.  Now to ask if he can try one means he’s giving in and I win.  The man’s Italian – that’s not gonna happen.  So while he’s looking around I grab one for me.I cut it in half and in awe of just how moist it is and how incredible it smells.

…he sits down next to me…REAL CLOSE I ignore him and bring half of the muffin up to my lips all the while seeing him out of the corner of my eye watching me intently. As I bite down I close my eyes because folks this thing was so good it even surprises me.  It was so ridiculously moist and so packed with flavor I was blown away.  I said not a word but got up to grab myself a glass of milk.  When I sat back down there was a HUGE bite taken out of one half and Mr. Fantabulous just sat there looking up at the sky to the point his head was almost touching his back.

I took another bite and when I went to reach for the other half of mine I see this “rogue” hand come up and snatch it off of my plate.  Now Mr. Fantabulous never made eye contact with me but that muffin was gone in no time.

Finally, I tapped him on the shoulder to which he turned around looking at me with those beautiful eyes as if to say “Yes my love? I’m innocent” and said “Well? What did you think?”  Of course, he started with the “I have no clue what you’re talking about” and ended with the “Man, baby, those are awesome!  So good!  It’s like a dessert but a muffin!” Make them again – even though I had almost 2 dozen of them on my counter.

Needless to say, these have become a staple in my house and probably one of my favorite ways to use up leftover sweet potatoes. So go on, have dessert for breakfast! 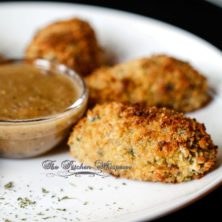