Just a few ingredients, a cast iron pan, and a hot fire are all you need to make these Wood-Fired Blistered Shishito Peppers. One truly addictive dish that’s ready in minutes!

So living in Pittsburgh, shishito peppers weren’t something I could very easily. They were like figs – maybe once a year in some obscure store 1-2 hours from where I lived. However living here in Arizona, they are everywhere and pretty much my latest obsession.

Little bites of Asian peppers that are well, kind of surprising to eat. What I mean is you’ll get mild flavors 9 times out of ten but it’s that tenth one where your taste buds are set ablaze (but in a good way!)

Now they aren’t that hot but they are hot enough to let you know, ‘Oh hey, I’m got some heat and you’re gonna know it!”.  With this recipe, you’ll see that I made it in Bella, my Authentic Pizza oven but I’ll also be giving you in the post how to make these in the oven and the grill.

All you need are a few items:

What are Shishito Peppers?

Shishito Peppers are originally from Japan and aren’t known to be super hot. On the Scoville Scale, they range from 50-200 Scoville Heat Units (SHU). Think of it this way, a typical jalapeno pepper averages over 5,000 SHU. So like I said, these are pretty mild.

That being said, typically one out of every 10 can be spicy. This why they sometimes are referred to as the “Russian Roulette” Peppers. You could eat 9 that are mild, a tad smoky, and salty from the blistering. But then you eat that 10th one and you’re reaching for that glass of water, milk, or beer.

So why is that 10th one spicy? Honestly, it all has to do with growing conditions, stress on the pepper plant, or other outside variables. And no, coloring difference doesn’t mean one is hotter.

I’m a HUGE fan of wood-firing stuff. I mean I do have a phenomenal outdoor wood-fired pizza oven named Bella.  The longest part of this whole recipe is getting the pizza oven up to temp. After that, the rest is crazy simple!

Cooking Shishito Peppers on the Grill

Cooking Shishito Peppers in the Oven

For this, you’ll need a cast-iron pan.

*Note if you do not have a cast-iron pan, you can preheat your oven to 425F, rack in the middle, and line a rimmed baking sheet with aluminum foil. Place the peppers on that and cook for about 10-12 minutes or until fully blistered.

What to Serve with Shishito Peppers

Honestly, they pair well with many things. As you can see below I put them as an appetizer with cilantro lime rice and Mexican pulled chicken. Yep, I went all fusion-like. However, it’s great with a dipping sauce or with grilled chicken or shrimp.

For a dipping sauce, you can go with an aioli of mayo, garlic. cilantro and lemon juice. It’s simple, light, and refreshing.

You could also pair it with a Soy & Ginger sauce of just low sodium soy sauce, brown sugar, ginger, sriracha, and lemon juice.

I also love it dipped in a Thai Peanut Sauce because well, I love that sauce!

Print
Print Recipe
Pin Recipe
★★★★★ 5 from 12 reviews
Did you make this recipe?
Leave a review 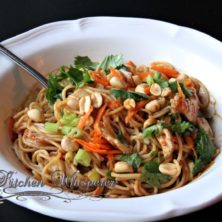 Thai Noodles with Chicken in a Spicy Peanut Sauce